One way to think of Lark is as a 'build your own game' kit for engaging your friends and your creative side. Part of the difficulty in describing Lark is the ambiguity it comes with. The ambiguity, as difficult as it makes it to market, is a feature of its charm that we wouldn't dream of discarding. The ambiguity leaves room for you and your friends to make it in your own style, to transform and recreate it in ways that suit you and bring the game to life.

We made up the guidelines, prompts, tenets, and wild cards, you do with them and the die what you want. Use all of the components or choose just a few. 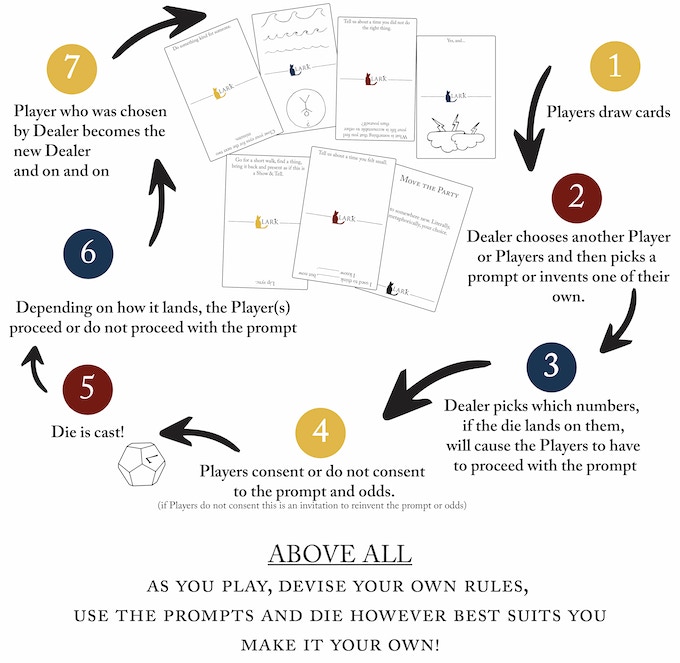 Players take turns prompting each other to do or share (the challenge) based on the prompts in their hands or heads and the roll of a 12-sided die (the chance).

Everyone draws cards. One player, the Dealer, prompts a fellow Player or Players with a challenge inspired by his card or his imagination and then assigns the odds of it happening using the 12-sided die. If the Players accept the proposed challenge and odds, the die is cast and the play either does or does not proceed. Either way the Player who accepted the challenge becomes the new Dealer. If multiple Players are challenged by the Dealer, let the die decide who becomes the new Dealer.

Mavis, Laura, Bob, and James are playing Lark. They agree to play their hand “cat up.”  James reads through his cards, finds one he likes, and says to Bob, “Bob, if I roll a 9 or 12 Peacock a little.”  Bob isn’t sure he heard correctly, asks for clarification. James says, “peacock a little.” Bob is still sure he doesn’t know what that means, but trusts he’ll sort it out by the time he needs to, so says “sure thing.” James rolls the die and it lands on 10. Bob gets the die without peacocking, even just a little. James puts his used card faceup in a discard pile.

Mavis, deciding she likes her idea more than those on her cards, says, “James if I roll an even you reenact a scene from your favorite movie without speaking.” James says, “Nah, odds are too high.” Mavis says, “alright, 3-5.” James says, “I’m game.” Before Mavis can cast the die, Laura plays the “Everyone Join In”  Wild Card and looks around for consent. Everyone agrees so Mavis casts the die and the game goes on.

As the game goes on and you and your fellow players take the tenets to heart you will begin creating the game in your own style while inventing your own prompts. This improves the game exceedingly.